This is part 2 of this post – A Game of Cricket

I opened my eyes to see light. Bright light. I grabbed my phone in a hurry to check the time. It was 8:30 am.

I was supposed to wake up at 5:30 am and go to the cricket ground. My mobile did not ring, because once again I had kept alarm for 5:30pm instead of am. And to top it, my mobile was in silent mode. My captain had called several times.

When I reached the cricket ground, half of the match was already over. I told the captain about the failed alarm. He said, “No, problem”. It was evident that the poor performance in the first match had relegated my position from a key player to a substitute. Now the only thing on the ground of which I held the key, was of my scooter.

We won this game. I cheered from the side. But as though aachara vedikattu (customary fireworks display to mark the end of a festival in Kerala), a ruckus broke out in the end. There were pushing and shoving. The tournament was canceled, and a few hours later, it was back on after compromise talks.

For the next match, I was back in demand. The captain had quit for personal reasons and a few others had already fled the city to their hometowns. We had only 8 players. Discussions to postpone the match didn’t bear fruit. We agreed to play with whatever players we had.

I was early to the ground this time. In the mild chill of the morning, I witnessed the creation of the 30-yard circle. The previous circle had been washed away by the rains. Two players rode round the wickets on a scooter, with the pillion rider marking the ground with a stick along the tire tracks. A third person decorated the markings with white chalk powder. A brand new 30-yard circle was thus ready.

When the match started, I was posted for fielding duty inside the circle. My previous match fielding position under the tree was abandoned due to a lack of players. Batsmen rarely hit the ball to that area. It was a perfect spot for me, you see.

And, that was not the only change for me from the previous game. Joshi Sir was now called Joshi Ji. I wondered what I would be called in the next match if I again flopped.

Joshi Ji’s time inside the 30-yard circle didn’t start well. A couple of balls whisked past me, so I resorted to stopping them with my feet, sometimes to comical effect – stopping the ball with one foot only to knock the ball further away with my other foot. My new captain reminded me that it wasn’t football we were playing. But then, I did stop a ball bound for the boundary with my feet.

Anyway, with only 8 players, we were playing a losing game. The opposition scored runs freely and put a mighty score of over 200 runs for us to chase. Our batsmen did give a chase, surprisingly, and even gave hope for an unlikely victory. Towards the end, though, things petered out and we lost. I was the last man to go for batting but the batting partner, who happened to be the new captain, was too eager to end the misery after a long and brilliant innings and got out before I could face a ball.

I was pleased. Joshi Ji was Not Out.

In the evening, news broke that the ground was not available for the last league match in the very next day. Our team vs team A. Efforts were made to stop the tournament and the trophy to be shared by all three teams. I had already grown sick of the tournament and couldn’t wait for it to end.

Within half an hour, a few over-enthusiastic players found a new ground with a concrete pitch. There were arguments over the safety of the batsmen, but the show would continue. I was disappointed. I called out to the Lord Almighty and offered to light a couple of candles if he could help me again. Only heavy rain could do something about it now. 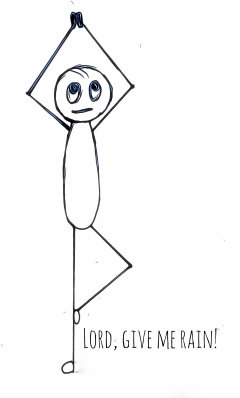 During our evening badminton game, the sound of raindrops falling on the tin roof of the facility brought giggles of joy. But alas! Rain stopped.

Daivame nee enne kai vittu! (God, you let me down this time)

In the night, after 4 pegs of whiskey, I announced that I was ready for the game the next morning. One guy commented: Great, but don’t touch the 5th peg. What if you wanted to play tonight itself!

The next morning, I was again at the ground much early. The captain made sure I woke up on time. The location of the new ground is fantastic. It is far away from the bustle of the city and deep in the backyard of a village. The ground is surrounded by agricultural fields and at the entrance lay a small pond. Beyond the fields are the woods.

I once again watched the 30-yard circle being made. The 30-yard circle must be the biggest invention of modern-day cricket. Most of the fielders are packed into the circle for the first few overs (I don’t know exactly for how many overs), allowing the batsmen to go for big runs. In our tournament, I didn’t think the circle made any impact on the scoreboard. It was more of a fancy thing that added to the vanity. Yet, the circle was a must. It was as if we just cannot play cricket without the circle.

This was a crucial match for both teams. If we won, we would go to the final. If the opponents won, they would make the tournament come to a tie with all three teams at two wins each. The organizers had not planned what to do in case of a tie.

While warming up, a ball was hit to the boundary and one of the dogs roaming on the fields picked up the ball and bolted off into the woods. Three men set off after the dog. The dog was too fast for them and disappeared out of sight.

We were asked to bat first. We scored about 150 runs, and I was not out again. This time, I scored 3 runs in 3 balls as the last batsman.

When it was our turn to field, I was once again appointed inside the 30-yard circle. I was asked to stand behind the keeper as cover. Things went smoothly until I dropped an easy catch. I was asked, “How can you play cricket if you cannot take that catch!”

What could I say!

The captain said it was alright and the match went on, but a bit shakily for me thereafter.

Once I unwittingly wandered out of the 30 yards encircling me and found the umpire, who was holding a cigarette between his fingers, staring at me through the haze of the smoke. He slowly raised a hand and called a no-ball.

I didn’t know that for me the 30-yard circle was supposed to be as important as Lakshman Rekha was for Sita. At least Sita got the opportunity to visit a foreign county and never had to return to the circle, but I was penalized and asked to step back in.

The sun was behind me and in my shadow, my slender upper body was twisted and my baggy trousers flapping vigorously in the wind. Joshi Ji looked like a buffoon.

All for a tournament and a medal which didn’t worth a place even in the kitchen.

P.S: The player whose catch I dropped went on to make a fine innings and we lost. Fights happened, as usual, in the end. This time nobody had the appetite to persist with the tournament anymore. The tournament was finally announced, Tie, and all three teams were to share the trophy.

Copyright © 2023 Create a free website or blog at WordPress.com.