We drive to the starting point of Kurinjal trek which is 11 kilometers from Kudremukh. It’s a beautiful drive through the lush green forest. The Western Ghats although is always beautiful it comes into its own after a few days of rain. The region explodes into an ocean of green.

At a four-way junction, we stop at the gate of the now-defunct Kudremukh Iron Ore Company Limited (KIOCL) to ask for the route. The sole guard to occupy the moss-covered security room signals that we just have to go straight ahead.

Kudremukh these days is mainly known as a trekkers paradise, but there was a time not too long ago the place was in the world map as an important mining center. The Kudremukh mine was one of the largest iron ore mines in the world for over 30 years from its inception in 1969. The mine was run by the government-owned KIOCL. The company abused the ecosystem with unabated mining. The real problem started when in the year 2000, pipelines broke twice to dump tons of iron ore and waste into the Badra river. The banks of the river turned black and certain types of fishes and otters started to disappear. The situation sparked many iron-willed environmentalists to rise against the government and after a prolonged fight, the mine was finally closed in 2015.

A few minutes more of driving brings us to a bridge over the Badra river. We click a couple of group pictures with the backdrop of the river and drive on to Bagavathi Nature Camp, the starting point of the trek.

The parking area at Bagavathi Nature Camp is crowded with cars, buses and tempo travelers – surprisingly high for a rainy day. A festive atmosphere on the trail is quite clearly on the cards. To confirm, the young and enthusiastic forest official on duty says that an army of trekkers is on their trek up the peak already.

We buy our tickets for Rs. 550 each and we walk out into the rain in full trekking form. The trek has officially commenced. The reading at the forest office had mentioned that it is 14 kilometers in total. For the first two kilometers, we walk on pristine tarmac highway.

Mr. AP and Mr. N are in bright orange raincoats. Mr. AP, typical of him, has over-worked on his preparations. He wears knee-high leech repellent socks – I’m sure those socks will work because it is obvious they haven’t seen water in a long while and once it gets wet it is going to stink the place out and no leech would ever want to be near, even they have their limits – and his bag, flat and wide, with the walking stick poking out at one corner gives him the look of man who just happened to land on the road by a parachute.

Miss S is as usual well dressed for the occasion. She wears rain-proof trekking pants and matching top. A black poncho raincoat hangs loosely on her shoulders. Perhaps the only botch on her immaculate self is that her lipstick got washed away by the rain. She walks like a ghost searching for a body to possess. At any point in the trek if she is to be seen alone by anyone other than us is sure to have an instant heart attack. 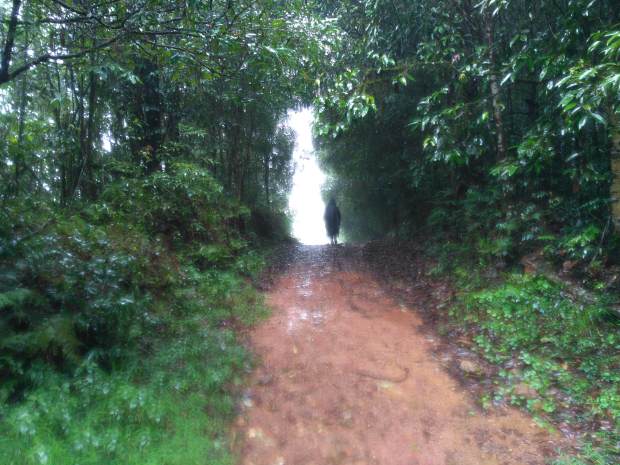 The apparition of Miss S

Mr. N, apart from his orange raincoat, he also wears shorts – of course, something has to be there to cover his modesty, but his shorts are a little too short that it is almost not there. He walks in his flipflop because he didn’t bother to bring shoes.

And as for me, I walk for a while like a circus clown with my multicolored socks pulled over my pants because my lovely friend had advised me that it will help prevent the leeches from biting my legs, but then I begin to hallucinate leeches creeping inside my pants. Not a very comforting feeling. I stop now and then to roll down the socks and check my legs and when the stops become more frequent, I unzip the lower half of the pants and reduce the pants to shorts. At least this way I can easily see any creeping leeches and remove them before I lose blood.

Once we are off the highway, we stand under a King Cobra warning board to click our first pictures on the trail. Since any event these days is just about photographs, and now that we have got the photographs, the smart idea would be to turn back and go home. Maybe we aren’t that smart. Miss S even less so. She’s adamant that we must complete the trek after all. So, we take careful steps forward into the forest.

Copyright © 2021 Create a free website or blog at WordPress.com.