Last Saturday on behalf of Children's day, my daughter's school had organized fancy dress competition for the KG classes. Kids were asked to dress up like any of the characters from Mahabharata, Ramayana or the Bible. Along with making an appearance, they were also supposed to say a dialogue related to the character they were presenting.

We decided to send our daughter dressed like an Angel since we have an angel dress which has long been waiting for a suitable occasion to be worn. I taught her a simple one-line dialogue to speak on the stage, my wife though, wasn’t very impressed by the one-liner and changed it into a four-sentence paragraph.

The paragraph had the words from Bible which Angel Gabriel spoke to Mary (Jesus’s Mother) when fore- saying the birth of Jesus. The original words from bible are very difficult as they are written in old English style so I simplified them into easy contemporary English and the last line of the simplified paragraph goes like this, “…and your son Jesus will save this world from sin”.

My daughter could by-heart most of the paragraph without much problem, but strangely the word, ‘save’ was a stumbling block. Somehow she couldn’t remember the word when she came to that point and tried to use alternate words like ‘protect’ which she’s more familiar with. But my wife was hell-bend on making her say the word ‘save’ itself. To make my daughter get a grip with the word, I told her the word is almost like the word ‘shave’.

My tips didn’t work out in the intended way because whenever I shave my facial hair, my daughter sits on my lap and watches me removing the hair so the word ‘shave’ registered in her mind than ‘save’ and she started saying, “…. Jesus will shave this world…” I didn’t want the competition judges to think that Jesus was a barber before turning himself into a God, but despite my efforts to correct her, she kept using the word.

My wife was worried that she may even say that on the stage. When her turn came to make her appearance, she climbed on to the stage in her angel dress and delivered the dialogue so fast and in a low voice that nobody could hear whether Jesus actually saved the world or instead shaved the world.

But then, it may not have mattered much because being a Hindu school the judges didn’t appear to have any knowledge of the Bible. They didn’t even look like they could distinguish between Mary and Rose Mary. 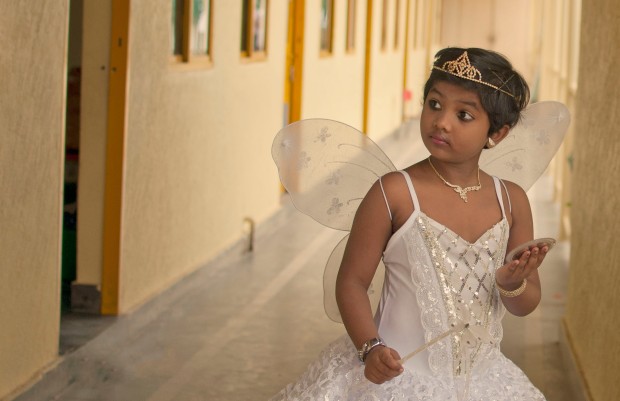 My daughter after the competition

2 Comments on Did Jesus ‘Shave’ the world?

Copyright © 2021 Create a free website or blog at WordPress.com.