When the dark monsoon clouds gather in the sky, it sometimes takes me back to the good and bad old days of monsoon in our village. It used to rain non-stop for days together. The river which runs through our village would turn into a large dirty gutter and move in a frightening rush. Schools declare holidays and we would spend our days playing with paper boats in the rain-made streams.

One compulsory daily activity was to seal the holes in our tile roof. Since the first monsoon arrives soon after a hot summer, tile roofing gets little time to get accustomed to the change in climate and leaks badly. Mom used to give me a long stick and ask me to poke the tiles and close the gap between the interconnected tiles, and in this process, I sometimes broke the tile and let rain come in like a water fall which is fun and frustration at the same time.

Monsoon evenings were magical. We would sit simply looking out at the rain, sipping on a cup of hot black coffee, while Ceylon radio (Sri Lankan), the only radio station available in our place at that time, filled our ears with beautiful Tamil songs. It was difficult not to fall in love with rain.

At night, the monsoon would get noisy. Bullfrogs would croak throughout the night. I remember the line from the movie, Dracula; [about the wolves that are howling] “They are the children of the night! What sweet music they make!!” Wolves’ howling may not sound musical and the croaking of frogs even less so, in fact they were irritating, but you just cannot shut them off, they are truly the children of the monsoon night!!

Though monsoon is romantic in many ways, it’s not without a sense of apprehension and unease I come to think of it. Water snakes were a menace. Frequently we got to see them lurking around the house or hanging by a garden plant. They are not poisonous, but they make an unpleasant sight.

Another worrying thing about monsoon was that most nights were spent in total darkness. Trees have a soul-connection with power lines and when they fall they take the power lines along with them. We often lived without power for weeks.

But my most harrowing memory of monsoon has no connection with rain. That was the day my father did not return home after work. We waited for him long after his usual return time, planting our eyes on the gate. But when he didn’t turn up, I and my brother set out to search. Luckily enough, we didn’t have to go much farther than our neighbor’s gate. We found him lying on his back on the wet ground, completely out of his senses.

My father had taken up hard drinking to drown his depression after he lost everything following heavy losses in his business. From being one of the richest men in his locality, to go penny less in a span of 10 years is an amazing nose dive.

After that night he got used to himself getting knocked out, so did we and we never went in search of him again. But that monsoon night, at least for few hours, we went through hell.

The very next monsoon, a different experience was awaiting me, again not related to rain. I remember sitting on our porch and staring at the rain and trying to work up a plan to revive my education that had stopped abruptly in the summer holidays owing to poor finance. I was in 11th Std then. My young brain could not think of anything worthwhile, but just when you’re losing hope, life has a habit of springing in good surprises. My grandfather came to my rescue, and I managed to get into a government school.

I believe that monsoon has played a commendable role in shaping my character. I learned to love and enjoy the ways of nature despite the hardships it presented us along the way. I learned to take things easy and move on, so when I grew up I became a humorist. I learned to be patient and let life take its course.

I also learned that dark clouds may or may not bring rain, but always pass to make a clear blue sky!! 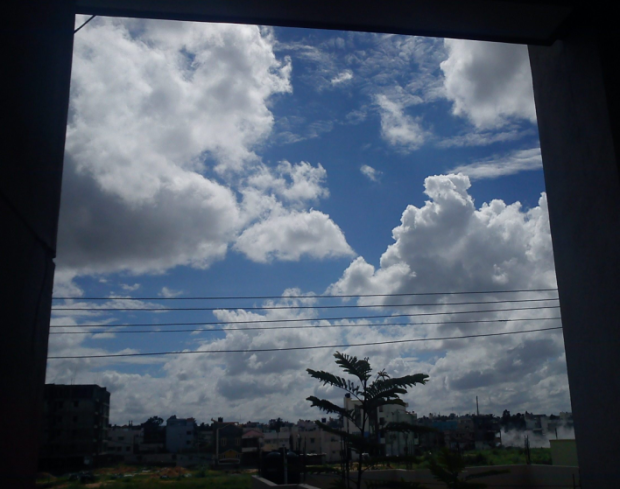 P.S: Let me announce that I have landed a book-writing contract. I have received gagging orders not to spill anything here. For now, dear readers please wish me success.

Copyright © 2023 Create a free website or blog at WordPress.com.