It’s been three years since I and my wife got married and more than ten years since we proclaimed our love for each other. But, much to my own annoyance, somehow her birthday always skipped my mind every year. It only dawned in me a couple of days after that ‘day’ had quietly passed by. The fact that she remembered my birthday every year and had been the first one to wish me all those years put my forgetfulness in an emotionally difficult spot.

Her birthday falls in the month of April. In the first year – we were in college then, I managed by telling her that I was under tremendous pressure to get a first class in the semester exams, (which usually comes in the month of April) so her birthday simply didn’t come into my thoughts. She didn’t complain as she herself wanted me to pass out of college with a decent rank.

In the second year, when I again forgot, she raised hell. She claimed that my forgetfulness is born out of general lack of commitment and involvement in the relationship, and she almost went her separate way. I don’t remember how I came out of this relationship calamity unscathed. I guess, I must have done something ingenious or told a brilliant lie to patch things up and keep the relationship going. 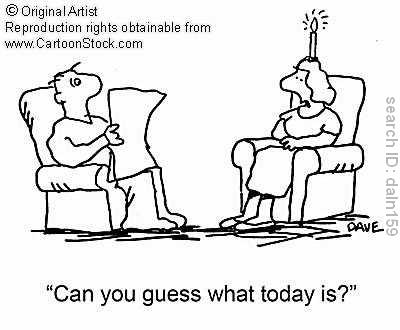 In the third year, she even gave me clues to help me figure out that it was her birthday that day. Alas, my uselessly pre-occupied brain could not pick up her hints. But this time there was no real danger of a relationship breakage as we had already moved on from the point of keeping our relationship hanging on such trivial things.

In the fourth year she conceived that I have a poor memory for dates and numbers, and stopped bothering me with her clues and hints. We simply celebrated her birthday whenever the lightning of realization struck in my brain – often a month from the actual date.

This continued for the next few years, even after we got married and until last April. This year, I was determined to make up for all the losses in the previous years. I booked a new scooter to be delivered on her birthday – on the 10th of April. I then got over-run by excitement and got the scooter delivered well in advance but I made other elaborate plans to make sure I still sprang in a surprise on the day. In fact me wishing her itself would be a huge surprise.

All the while my wife wasn’t aware of my plans. She didn’t consider the scooter as a gift particularly for her as she knows I will be using it more than her. I think, she simply didn’t expect me to remember her birthday.

Late evening on the eve of her birthday, I bought a small cake and kept it hidden under our cot. I was all set. At 12 midnight I lighted a candle, placed the cake on the bed and woke her up from sleep. I planted a gentle kiss on her cheek, and before her baffled eyes could make any sense out of the set-up, I told, “Happy birthday”. She was bowled-out, stumped or whatever word you would like to see here – she was shocked, and genuinely glad. Next morning I woke up early to carry out the plans I had made in my mind. I still hadn’t told her about the plans. I just wanted to overwhelm her with surprises.

It was half-past nine in the morning when I realized that she had not received any phone call or message wishing her for her birthday. Needless to say, I was confused. I plodded around, beginning to feel like a fool. I didn’t want to clarify it with her friends because that would be the last thing any husband would want to do – it meant ultimate humiliation for a wife, and husbands have every reason to fear for their life. I waited impatiently for a chance to cross-verify the date in her certificates, and when she went to take bath, I ran to the bedroom cupboard where we have kept our certificates. After 10 minutes of rummaging through the files, I found her SSLC certificate.

I scratched my head and plunked down on the cot. In the certificate it was clearly written in bold letters, the date of her birth as 8th April.

52 Comments on How I managed to forget my wife’s birthday every year for the last ten years, and still be alive!!

Copyright © 2022 Create a free website or blog at WordPress.com.