After the IT recession, companies have realized the importance of tight ‘book’ keeping. Cost-cutting is the top agenda for most IT firms. I heard some companies have even replaced toilet paper rolls with cut pieces of old news papers. I think, in the future, these companies may even ask their employees to bring papers from home for personal cleaning needs.

While these are Draconian measures taken at the most desperate moment by some fiscally marginal enterprise, the truth is, most companies, including some huge profit makers, under the pretense of IT recession, are willing to jump at any given opportunity to save a few petty dollars on operating cost.

Perhaps the easy ones are Power Saving – like turning off all computer workstations and monitors at the end of the day, and dispensing with conferences/seminars. The harder ones move into cutting back on benefits, and corporate transportation.

Corporate transportation is one area that would easily catch the eyes of any finance manager trying to wield his axe on the expense sheet. While some companies called off their corporate cab services completely, others decided to reduce the number of cabs, and maximize area coverage with some ingenious routing plans.

Here I’m presenting two sample transport route maps which are in practice in most companies; the Redemption Route, and the Happy Route, as I would like to call them.  The strategy is not just about hauling back a few bucks on transport expenses, but a crucial survival plan for the entire organization for a long time to come. 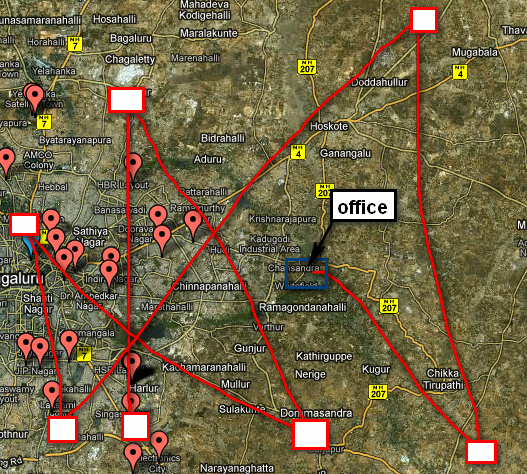 The Redemption Route: The IT recession has shaken the very basis of the religious hypothesis of most companies. The idea behind this route is to put their employees on a redemption route where they will be given a chance to repent for all the sins they did in their life.

Usually the employees are picked up early in the morning, just after dawn, and are taken across the city in a zigzagged journey covering almost the entire city in a blistering speed that make them pray for survival.

The companies think, if half of their employees can turn to the ways of GOD, the company would earn HIS mercy, and will be allowed to stay alive if recession is to hit again.

Happy Route: A slightly different concept applies here. (This is for employees who chose to move closer to their office). Here the idea is to send the employees round the office at least three times like a special ritual, which will remind the employees that ‘work’ is god, and office is the place of worship. In this pilgrimage, each employee will be given a brief glimpse of the office building from a distance before being hurried off for the next round. So when they finally reach the office it often gives them the feeling of reaching Kailas or Mecca or Jerusalem and they go about their job with utmost reverence.  This, the companies believe would help the organization increase their revenue, which in turn promises a safe future.

If I’m to write a book on cost cutting, under the title ‘Cutting cost without cutting head’, or ’25 ideas to cut cost and stay alive’, the ultimate idea would be to dissolve the concept of an ‘Office’ instead allowing all the employees to work from home on a permanent basis requiring only to come out for monthly team meeting which would be held in some deserted parks or empty bus terminals.

Copyright © 2020 Create a free website or blog at WordPress.com.