I was brought up in a village which insanely believed in ghosts until recently. There are many stories about spectral encounters, demonic possession and paranormal haunting. This particular story was one of the strangest sagas of possession. This ghost was first spotted on one of the scheduled power-cut nights in the corner of a lonely street. A villager returning home after closing his shop saw something shocking in the darkness, he screamed and passed out right on the spot. Later he explained that he saw something ‘cloud-like’ hanging in the air. It was not touching the ground. He was sure what he had seen was a ghost.

Incidents like this were nothing new to the villagers. Once a young woman complained she had been chased by ‘rushing footsteps’ on her way to the local water pond one early afternoon. She had run without looking back. A young boy was slapped on the back of his head while peeing over the fence into his neighbor’s farm. He claimed he was alone in that place and no one was around. Stories like this were abundant and over a period of time ghosts became a major part of our entertainment system. Some ghost stories would run for two days and another would run for a week or a month, just like movies. The story of the ‘hanging ghost’ (let me call it something) was forgotten after two days.

Exactly two weeks after the first sighting, the ghost reappeared. Again on a power-cut night, again on the same spot. This time the witness was an auto driver who was sleeping in his parked auto. He woke up hearing a loud thud and there it was…draped in white, the ghost was sitting on a compound wall and before the auto driver could make any sense out of it, the ghost disappeared.

Next day morning, the second coming of the ‘hanging ghost’ was widely discussed. People expressed their concern for the woman who was living alone in the last house of that street. Sheela Chechi, as we called her, was the estranged wife of a military Jawan. It was on her compound wall the ghost was spotted in the second time.

If the first two incidents were mere spectral encounters, the third one was to lead to an intriguing story of possession and exorcism. An intoxicated spirit was finding his way home after his errand to the local wine shop. When he reached that particular street he saw something gliding through the air. First he thought it could be someone, like himself, drifting through the air on a high. The entity suddenly moved faster, jumped the compound wall and disappeared into Sheela Chechi’s backyard. “Ghost” !! he called out loud. Within minutes a crowd of ten had surrounded Sheela Chechi’s house. “The ghost is inside the house”, said one of the waiting men. They knocked on the door. Suddenly the door flung open and Sheela Chechi sprang out like a bloodthirsty tigress out of the cage. Her hair spread, eyes glassy and wild, she ran out into the darkness and the crowd chased.

Like most haunted places, our village also had a ghost tree (a century-old banyan tree). Villagers who were following Sheela Chechi found her sitting under the ghost tree. She was mindlessly blabbering something in an unusually hoarse voice. The villagers stood aghast and watched. Sheela Chechi was possessed!! 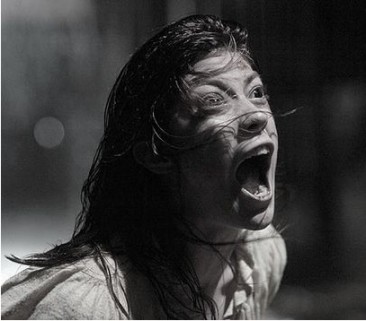 The process of exorcism started the next day morning. It was a simple two-step procedure administered by the villagers themselves. For possessed men we had male exorcists and for females we had female exorcists. A gang of experienced old females got ready for the process. The first step of exorcism was physical treatment.

They beat Sheela Chechi with broomsticks, they kicked and spat on her. They crushed garlic into her ears and squeezed garlic juice into her nostrils. The possessed signaled the exorcists to thrust some garlic into her mouth as well, and burst into a demonic laughter. It must be a non-vegetarian ghost, an old woman exclaimed. They asked the ghost to reveal its identity, but could only receive a cold, bone-chilling stare from the possessed.

The villagers quickly moved to the second level of treatment having concluded that physical treatment was no good. The second stage is verbal treatment. It had had telling effects on all previous instances. It was to vituperate the ghost in the worst possible way. They called the ghost names. It’s mother and father were berated. It’s presence mocked. No ghosts in its right mind could stand against this string of verbal assault of highest profanity. Sheela Chechi did not last long. She collapsed. It was the sign of the ghost leaving the body.

Exorcism was successful, but the identity of the ghost was still a mystery except for the belief it was a male ghost, because two months after the incident Sheela Chechi was rumored to have become pregnant and later aborted the fetus in a far-off hospital. However, the ‘Hanging Ghost’ which was seen in and around Sheela Chechi’s house was never spotted again after that night.

P.S: Dear readers, this is a humor post based on a true story.  The woman (Sheela Chechi) had an illegal relationship with a man from the same village. The man used to visit her at her house on every scheduled power-cut nights and some villagers who happened to see the man stealthy moving about in the dark, mistook him for ghost. The possession scenes at the end of the story is a false drama staged by the woman to escape from being caught red-handed with the man. Though most of the ignorant villagers believed it was a real possession, there were people who knew the truth.

This is one of my old posts, republished. I will  come up with a new one shortly.

27 Comments on A Ghost Story